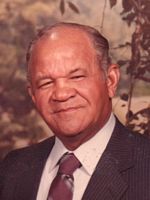 The second of Mr. Thomas Hilliard & Mrs. Georgia Rae Maynor Oxendine’s eight children, Mr. Robert was a loving and devoted son and brother. A proud Lumbee and Pembroke, NC native, Robert joined the US Navy following his high school graduation where he served during WW II in the Pacific. In 1956, Robert joined the major supply chain service company McLane Trucking where he enjoyed a long, 30 year career before retiring in 1986.

Mr. Robert married the love of his life, Ms. Lois Irene Stuart, on February 6, 1960. Together, they successfully raised two daughters and one son in Lyman, SC. Aside from his beautiful brood, Robert raised and loved a number of K-9 “children” who loyally and eagerly accompanied him on his many hunting excursions throughout the years. Seeking sun and sand, Robert and his family enjoyed numerous trips to the beaches of Florida and Myrtle Beach, SC. Once empty nesters, the spirit of adventure hardly failed to subside and Robert continued to enjoy an active lifestyle regularly taking his beloved bicycle out for a spin and meeting up with his retired McLane Trucking buddies to walk down memory lane. Priding himself on his sharp memory, Robert could vividly recount details from his time in war, name all US presidents in quick succession, and recite his favorite poems well into his later years to the delight of his beloved family and friends.

The funeral will be 2:00 p.m. Monday, February 27, 2017, at Berea Baptist Church with the Rev. Chris Hunt officiating. Burial will follow in the Sandcutt Cemetery.