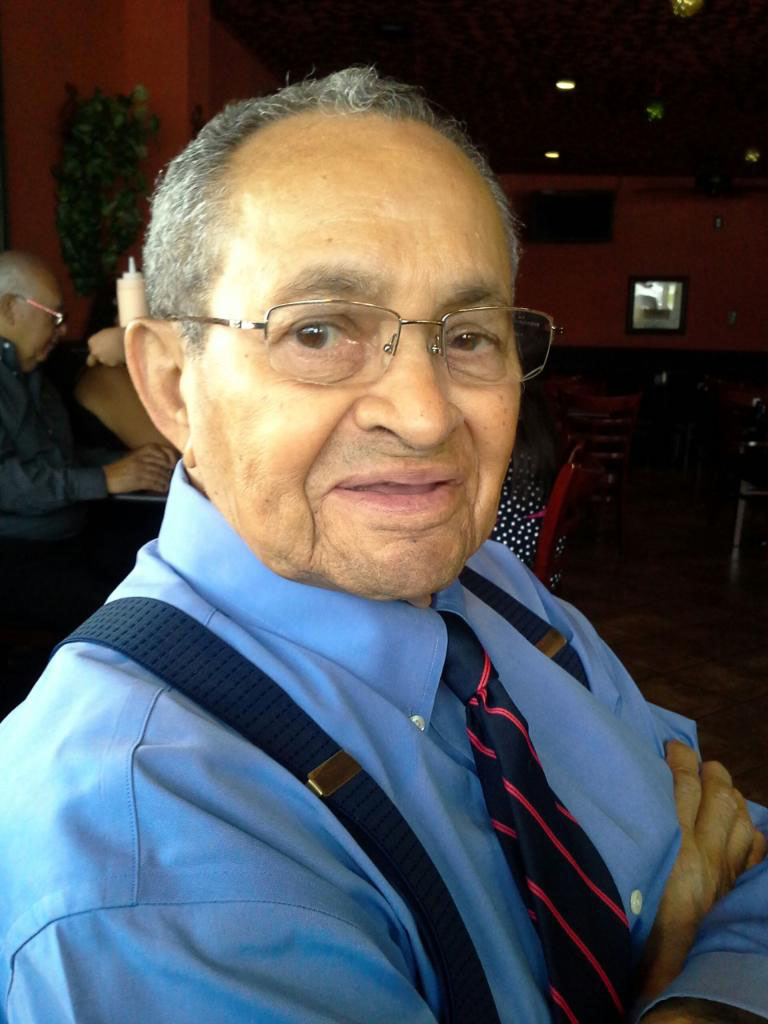 Dr. Martin L. Brooks, 88 was born on April 19, 1929 in Detroit, Michigan and returned to his heavenly home on Thursday, January 4, 2018. His love for his family and community, as well as his faith in God motivated him throughout his life. Martin, who was affectionately known as “Charge” by his siblings, is preceded in death by his father Peter Brooks, mother Attie Mae Cummings; sisters Althea Maynor, Nettie Lowry, Daphne Locklear; brothers Dalton Peter Brooks, James Grady Brooks; son Michael L. Brooks; granddaughter Nicolette Brooks Hunt; and grandsons Peyton Strickland and Logan Brooks. He is survived by his wife Pam Brooks; daughters Laurie Godwin, Kathy Strickland, Mary Jane Nyswonger, and Amy Read; son Matthew L. Brooks and their mother Joanne Y. Brooks; step daughter Ann Chappell; grandchildren, who lovingly called him “Papadoc,” Becky Brooks Clark, Martin E. Brooks, Edgar B. Brooks, Jason R. Herndon, Miles E. Herndon, Alison B. Godwin, Collin M. Strickland, Joslyn R. Strickland, Travis W. Temples, Robert B. Brooks, Adam T. Brooks, Emily G. Brooks, Hannah E. Brooks, Sarah M. Brooks, Alden M. Hestikind, and Hadyn A. Read; great grandchildren Mikayla H. Hunt, Justin Hunt, Austin Brooks, Asher O. Herndon, Ames O. Herndon, Luna J. Herndon, Brynn R. Herndon, Weston R. Herndon, Peyton L. Bearden, Isla R. Bearden, Elise M. Temples, Adele V. Temples, Mark W. Temples, Sienna L. Brooks; sisters Bernice Lowry, Joyce Maynor; brothers Ronald Brooks, Paul Brooks, Howard Brooks, Ray Brooks, Veril Brooks, David Brooks; and a multitude of nieces and nephews. Dr. Brooks, a Pembroke native, is the oldest son of Peter and Attie Mae Cummings Brooks. He was valedictorian of his high school class and went on to receive his undergraduate, graduate, and medical degrees from the University of Michigan. While in Michigan, he worked for two years with the American Society of Clinical Pathology and American Society of Medicine before moving with his wife and young family back to Pembroke in 1958 to open his medical practice. His first office, an old store front on Main Street, served entire families; including elderly as well as infants. At the time, he was one of two practicing American Indian physicians in North Carolina. He later opened Brooks Medical Clinic on N.C. 711, directly beside his home. Brooks was the only doctor in Pembroke from 1961 to 1973. Dr. Brooks served as a member of the medical staff at hospitals in Lumberton and Laurinburg. He was the first American Indian member of the medical staff at Southeastern Regional Medical Center (SRMC) where the doctor’s lounge is named in his honor. Brooks later served on the board of trustees of SRMC. It can safely be said that multiple generations of Robeson County and surrounding area residents were the beneficiaries of his deep devotion to serving his people. That service continued with him practicing his profession right up to the day before his passing. Brooks was a tireless advocate for addiction treatment. He served as medical director of Carolina Manor Treatment Center and Samaritan Colony, Inc. Dr. Brooks has been involved in countless recovery related activities and projects, including the N.C. Physicians Health and Effectiveness Committee and Renewal Center of the South., a permanent residential retreat center for Twelve Step Spiritual renewal. At one time Dr. Brooks was one of the most sought after speakers in the south. For decades, Brooks supported UNC Pembroke and its mission. He served as medical director of Student Health Services from 1976 to 1985. He served on the university’s board of trustees and was granted an Honorary Doctorate of Laws by the University of North Carolina at Pembroke in 2017. His community activism includes a long list of professional memberships and elected offices, including the Renewal Center of the South, American Medical Society, Robeson County Medical Society, Berea Baptist Church, Native American Interfaith Ministries Board of Directors, the N.C. Board of Higher Education, Charter President of the Pembroke Kiwanis club, and Life Member of the NAACP. He received the community award for “20 Years of Outstanding Service” to the Robeson County Branches of NAACP. Dr. Brooks was awarded the “Order of the Long Leaf Pine” by Governor Michael Easley in 2006. Dr. Brooks was a charter board member of Lumbee Guaranty Bank and served in that capacity since the inception of the Bank’s charter. He is also a recipient of the Henry Berry Lowry Award, the highest honor bestowed on a member of the Lumbee Tribe. Dr. Brooks was a staunch community activist. He fought against racial discrimination. He played a major role in breaking the practice of double-voting, a tool of political control that existed in the Robeson County Board of Education prior to 1970. Brooks is recognized across the county, the state, and beyond as a trailblazer for his humanitarian efforts, medical skills, and compassion and service to all people. For more than 60 years, he dedicated his life to caring for others and serving all people with dedication and purpose, regardless of ethnicity, religion, station in life, or disability. On a more personal note, Dad was a wise and gentle man. He loved his children, grand and great grandchildren, Michigan football, riding on his lawn mower whether he was cutting the grass or not, his brothers and sisters, working in his office, and his red plaid vest. He called Robeson County “God’s Country.” As you’ve read, he was very involved in his community and profession. He also kept up with the activities, struggles, and accomplishments of his 6 children, 19 grandchildren and 14 great grandchildren. Education was paramount to him. He pushed us all, supported our personal growth, and always had time for a story that imparted a nugget of wisdom or a lesson. We routinely and often said to him, “I Love You” and his reply, “Same Here!”